Sorrento will host ECU Joondalup in the WA semi-final of the FFA Cup, while Floreat Athena are at home to Cockburn City.

The matches will be played on 23 and 24 June, with the winners advancing to the FFA Cup national Round of 32 as well as the State Cup final.

The draw was made on Thursday following the preliminary quarter-finals earlier this week.

A strong Floreat side had little trouble getting past Gosnells City, defeating the State League Division Two outfit 3-0 on Tuesday. Nicholas Ambrogio opened the scoring on 19 minutes, Dean Evans doubled the lead on half-time and Ludovic Boi added the third in the second half.

The other ties were on Wednesday, with the game of the round coming at Percy Doyle Reserve. Sorrento found themselves 2-0 down inside the opening 16 minutes against Armadale, with Angel Andres converting two penalties. Jordan Brown pulled one back on 36 minutes and by half-time the Gulls were level through Ryan McLaughlin. The comeback was complete when David Stokoe hit the winner on 64 minutes.

At Dalmatinac Park, Cameron Edwards and Sebastian Da Silva were on target for Cockburn City in their 2-1 win over Perth SC. Kristian Santich pulled one back in stoppage time for the Azzurri.

The other game saw ECU win 2-0 at Bayswater City, the goals coming in the second half from Danny Hodgson and Nelson Tshongo. 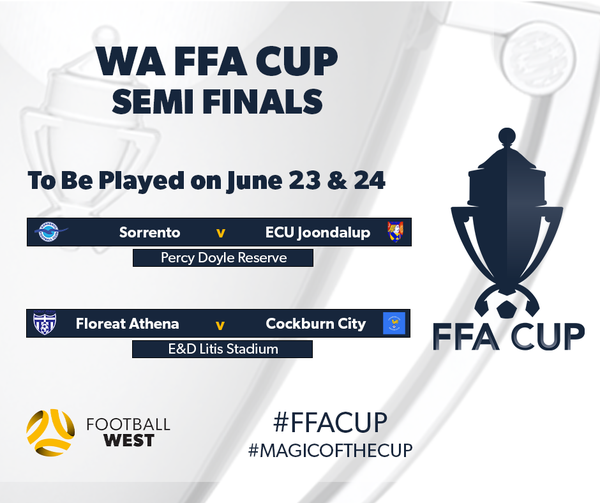