ALL YOU NEED TO KNOW ABOUT WALKING FOOTBALL

The announcement, at the home of Inglewood United, included over $1.8m for Football Federation Australia’s Walking Football – One Million program, which includes Football West.

The two ministers joined in a demonstration match of Walking Football, the short format game which originated in the UK and is immensely popular there.

Minister McKenzie hailed the physical, mental health and social benefits of Walking Football, which Football West has piloted over the past two years.

“The strong demand for Better Ageing grants shows us that organisations are ready and willing to help older Aussies adopt a healthier lifestyle.

“Physical activity for over 65s is not a one-size-fits-all proposition.

“If we can get people over 65 back into their local clubs, participating in sport, we know we’re going to see positive benefits to the health budget, both mental health and physical health, and we also know the power of sport extends to social connectedness.”

Minister Wyatt, the MP for Hasluck, said: “These exciting and engaging activities are about giving us more choice for a longer life, as increasing numbers of Australians live to 100 and beyond.

“I’ve just played the first half of a game … it was challenging, more than I thought it would be.

“Maybe at some stage we’ll burn a football and have the soccer Ashes between the senior Australians and the senior British team.”

Football West CEO James Curtis, who represented the FFA at today’s announcement, said: “On behalf of FFA I would like to thank Federal Government for this support.

“The program Walking Football in the UK is huge. Here in WA we piloted the program over the last two years and the success has been really strong.

“It’s a lot of hours but we know football is the most popular played team sport in Australia so there’s a lot of people over the age of 65 who are looking forward to putting the boots back on or for the first time.

“It’s not just physical outcomes, it’s about making sure Australians over 65 become part of clubs and that clubs are an inclusive environment so we can improve the physical and mental health outcomes.” 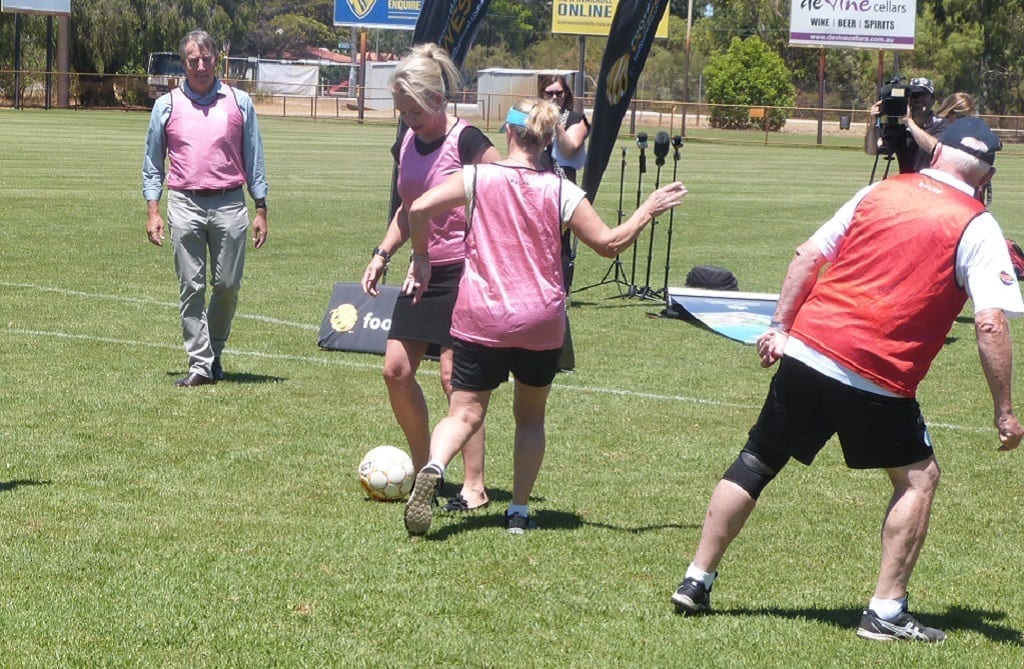 The Perth Glory Foundation also received $858,000 for their Move Together WA project, aiming to increase activity and social interaction among up to 400,000 West Australian seniors.

Football West is holding two Walking Football competitions this year. For full details and to register an expression of interest, click HERE.