Ticket sales from the 2021 Hyundai Community Football Raffle have brought in more than $180,000 for clubs and associations across WA – a massive 137% increase from 2019.

Clubs sold just over 91,000 tickets between April and September – a leap of 52,000 tickets from two years ago.

With 100% of money raised from ticket sales retained by clubs and associations, this is a fantastic result for grassroots football in Western Australia.

Perth SC sold the most tickets, bringing in more than $12,000. Balcatta were next followed by Ashfield, with both clubs banking almost $10,000.

The second and third prizes were won in regional WA.

Abrolhos FC in the Mid West scooped an extra $1,500 for selling the ticket for the second prize – a Hyundai WA Getaway to Margaret River in a Hyundai Palisade staying at Pullman Bunker Bay Resort. This prize is valued at $5,000.

Albany Caledonians received an extra $500 after they sold the third prize ticket for a Hyundai WA Getaway to Rottnest Island staying at Discovery Resort, valued at $2,500.

There were also two bonus prizes.

The first was for participants who purchased tickets to the value of $40 or more. The prize is a signed Chelsea or a signed Perth Glory shirt and this ticket was sold by Sorrento.

Meanwhile, Balga will receive $1,500 to support community engagement and junior development for being the club to sell the most tickets online.

The individual prize winners will be announced soon. All winners have been notified.

Hyundai Australia Regional General Manager WA Michael Beros said: “On behalf of Hyundai Australia and the Hyundai dealerships across WA, we are simply blown away by the success of the Community Football Raffle.

“After having the 2020 raffle taken away from us due to the pandemic, it was critical that 2021 was a big success and now we’ve got over 180,000 reasons to celebrate how special the world game is in our WA community.”

Football West Chief Football Officer Jamie Harnwell said: “We are delighted with these numbers, and it is terrific to see our clubs and associations get behind the Hyundai Community Football Raffle.

“We are proud of our partnership with Hyundai and want to thank Michael Beros and his team for their continued outstanding support of the grassroots game.” 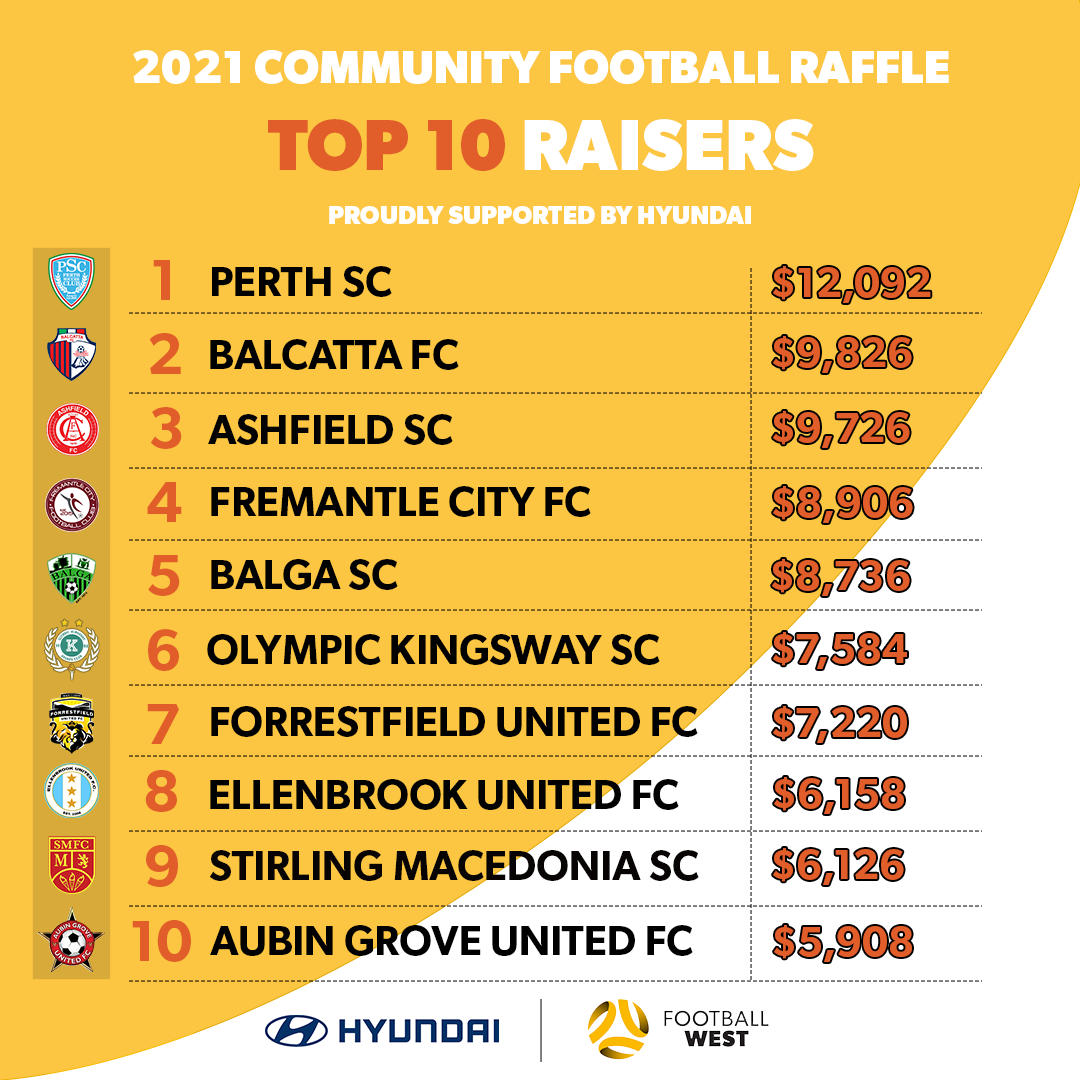 *The Hyundai Community Football Raffle did not take place in 2020 due to Covid.